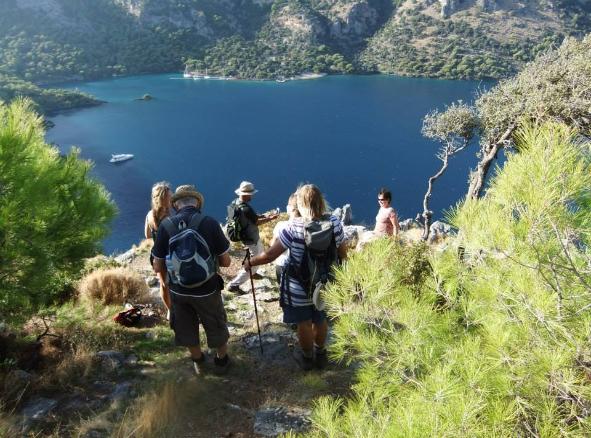 All aboard a traditional gulet for a sailing and walking holiday on Turkey’s southwest coast.

The Lycian coast of Turkey is a region of pomegranates, honey bees, sure-footed goats and sheer cliffs plunging into turquoise sea.

The ancient Lycians, mentioned in Homer’s Iliad, sailed into steep-sided sandy bays that are still only accessible by sea. The ruins of their cities and tombs, carved into solid rock and resembling the dwellings at Petra, draw visitors from across the world.

Other lesser-known attractions are equally compelling. There’s swimming in the sunken stone ruins of Cleopatra’s bath house, or having your face (or legs) shaved with a cut-throat razor by a traditional Turkish barber next to the beach.

The Lycian Way walking trail, which opened in 1999 has been chosen by Britain’s The Sunday Times as one of the 10 best walks in the world. Shepherds have walked tracks in the same area for millennia.

To fully appreciate this Mediterranean paradise for walking and sailing, you need a boat; preferably a Turkish gulet, the graceful two-masted traditional wooden sailing vessel synonymous with these waters.

It’s sailing that brings me to Marmaris, a former fishing village on Turkey’s southwest coast, now devoted to tourism. Marmaris is gulet central. I am due to meet my gulet guide, Anne at Anatolia Cafe, a well-known pick-up and drop-off point for boat trips.

What The Papers Say

published in Sydney it’s Australia’s top selling weekend newspaper. Travel writer Peter Needham joined us for a week of hiking and cruising along this beautiful coastline. Read what he had to say about this fabulous trip.

Want to do this trip? Take a look at Dates and Prices

Anatolia Cafe is a diverting place to wait. Suntanned visitors from Britain and Germany scoot along the promenade on little battery-powered tricycles, a cheap version of the Segway. A van bearing the sign “I Prefer Real Turkish Bath” arrives and disgorges beaming folk who have obviously just enjoyed one. A labyrinthine covered bazaar leads off to the left, replete with T-shirts, jewellery , Ottoman rugs and tattoo parlours.

Anne arrives, introduces herself and uses her mobile phone to find our fellow passengers in the crowded cafe, in fact they are sitting at the table next to us. Our gulet turns out to be a trim 25m craft with eight en-suite cabins and a crew of three, under the command of Captain Can Yasar, a master carpenter who fitted out the vessel himself. Storage space is not large but more than adequate for walkers travelling light.

On deck you can catch the breeze, watch flying fish scudding alongside deepening to an inky blue. Tracks are fragrant with the smell of pale green pines, dry lavender and sage. 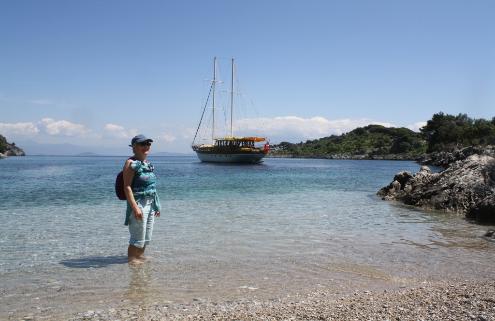 On rocky outcrops, the tall stalks of sea squills bend in the breeze. Our tracks take us past rows of pale blue beehives, their residents buzzing industriously. We encounter ancient cylindrical gravestones engraved in Arabic script and orchards where pomegranates dangle like red lanterns from branches.

In a grove of ancient olive trees, another member of the party and I sample a glossy black olive direct from the tree. It looks exquisite but proves a bitter experience.

All else is sweet. Some experiences are tranquil, like Nimara Caves on Paradise Island, a cool and serene cavern whee ancients worshipped their gods more than 10,000 years ago. No signposts indicate this site, you have to know where to turn off the track. Another walk leads to the ruins of Kaunos, a city founded about 900BC on the border of the kingdom of Lycia. Gazing down from the amphitheatre. It’s easy to visualise how Kaunos might have looked when ships bearing slaves and spices sailed into its harbour, long since silted up. Malaria decimated this thriving metropolis.